I am the second wife seeking residence order. I initiated DV case against him and another criminal complaint of 420,498A,354,376,324 of I.P.C against my in-laws, I want a residence in the matrimonial house but his first divorce is pending. He compelled me by force to sign-up in his divorce case to implicate me that I know his first marriage. He after our marriage want to marry with a third woman so created an account on Jeevansathi matrimonial site and I caught him I have this proof I submit to the court.

He did sexual assault against me after 17 days of interaction and threatened me to do what I said to you. I did sign in up. I give my statement under 164 to the magistrate about this real assault, but his lawyer defence is that I have prior knowledge so I can not get relief of right to residence in the matrimonial house. His wife doesn’t live with him. Please kindly give me advice on how to get the right to residence in my husband house. He has by writing admitted that I am his wife, his family members also in writing admitted that I am their daughter in law before Mahila samupdeshan Kendra, and their fir against me of 380,457, I gave my marriage certificate to the court.

Does a woman in domestic nature in strange nature have the right to residence in the matrimonial house?

Your marriage is void because the first marriage has been subsisting. In the current scenario, your husband has committed the offence of bigamy. However, the second marriage is void but you can claim relief under the Domestic Violence Act.

You knew that he has a legally wedded wife and a divorce case is pending. So, you cannot claim that your marriage is valid because your husband and in-laws have admitted. Admission of interested person does not confer you the status of a wife. You are a married wife by a deceitful act of husband but not legally married.

Your husband played a crucial role in the solemnisation of marriage so later on, he cannot deny it.

Claim under the domestic violence act

After the marriage, you have been living with him in a shared household. You can prove that he has been committing violence and denying to live with you. So far as domestic violence is concerned you can claim residence order.

An aggrieved person is entitled to the relief available under the DV Act. You are an aggrieved person as per the provisions of DV Act. In Poonam v. Vijay Kumar Jindal, 2015 (4) RCR (Criminal) 300, the P&H High Court is held that to grant maintenance under the Domestic Violence Act only relationship is to be approved and validity of the marriage not to be decided by the Court. 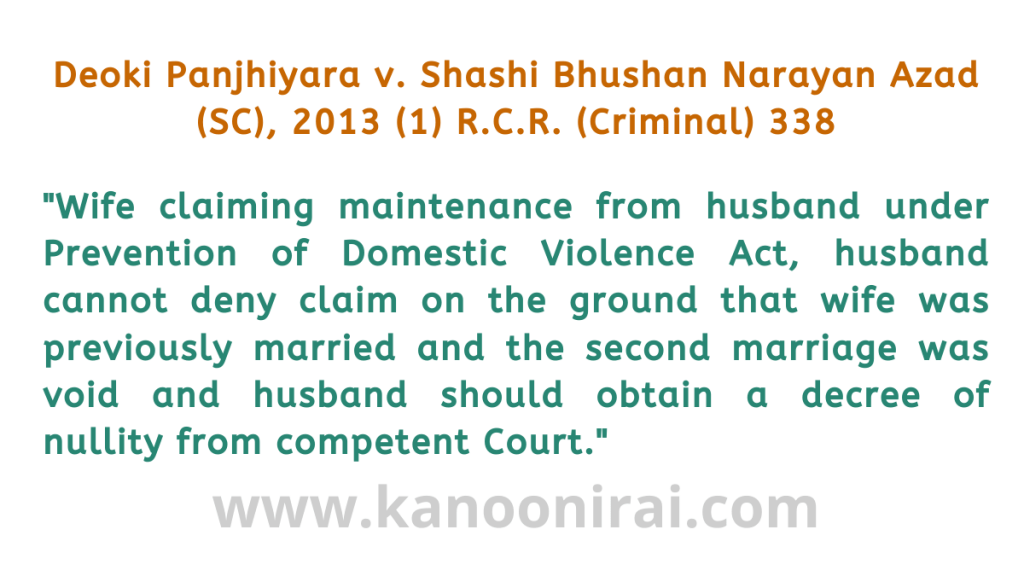 When you are entitled to claim maintenance under the Domestic Violence Act, therefore, you can also claim for the residence order.

Entitled to claim relief till the decree of court

You can claim any relief under the DV Act till the decree passed by the competent court. In present situation your husband and in-laws committed fraud with you. Therefore, you can file a suit for declaration of your marriag null and void. Till the passing of such decree you are entitled to demand residence in the shared household.